With the introduction of the 2016 MacBook Pro line, Apple introduced a number of new features, including an all USB-C port configuration, the Butterfly Keyboard, and the Touch Bar with Touch ID sensor. The Butterfly Keyboard is ok, but I preferred the Magic Keyboard from the iMac. I don’t use many USB peripherals, so USB Dongle Town to convert USB-C to the popular USB-A wasn’t too bad. The Touch ID sensor has been a great addition to the MacBook Pro. However, the Touch Bar has been seen by many Mac users as a so-so addition.

The Touch Bar replaced the standard Function Key (F Keys) row that sat above the number row of keys on the standard MacBook Pro keyboard. To be sure, the technology behind the Touch Bar is impressive, featuring a Retina Display with touch input. The whole thing is driven by the secure T1 chip which is running a stripped down version of watchOS.

While I like using the Touch Bar for things like activating Siri, adjusting the brightness and volume controls, and media keys in the Music/iTunes app. In my opinion, the Touch Bar never realized the excitement that Apple had hoped. It is cool, but I can live with out it.

Meghan, who has a 2019 13-inch MacBook Pro, recently complained to me that her Mac didn’t have the F Keys that her fellow engineering program classmates have on their Windows PCs. In typical Apple fashion where a “clean” design is valued over user functionality, holding down the “fn” key on the MacBook Pro’s keyboard changes the default Mac Touch Bar keys into Windows/Unix-style F Keys.

Constantly pressing the fn key to bring up the F Keys can get old quickly if you are working on an exercise in class or a homework assignment. Fortunately, you can setup a macOS shortcut for the Touch Bar that flips the behavior around. Here’s how to set up a Touch Bar F Key shortcut by application.

Apple has released macOS 10.15 Catalina for Macintosh computers stretching all the way back to 2012. That’s great that Apple is still supporting those hardware platforms and newer!

But, right from the get go, there is one thing that is driving me nuts, and that’s the end of my dear friend, iTunes. Under Catalina, iTunes 12 for macOS no longer works.

I knew this day was coming. Apple announced it back at WWDC in June that iTunes, after an almost 20-year run, would be replaced by Apple Music, TV, Podcasts, and Books. The iPod and iOS sync features would be transplanted from iTunes directly into the Catalina Finder. But I was still hoping that iTunes would still work. I have been using iTunes daily at least since the introduction of Mac OS X.

With this in mind, I decided to embrace change, and I installed Catalina last night on my main 5k iMac, a 27-inch model from late 2015. On the plus side, Apple Music seems to have much better support for my two HomePods that are in a stereo pair. iTunes would often lose the connection or one HomePod would go AWOL and drop out. Music, for all it’s weird iOS influences, works well in this regard with my limited testing.

However, there is one thing that does drive me nuts. It’s the default, in-your-face promotion of Apple Music – Apple’s monthly music streaming subscription service. Call me old fashioned, but I like the idea of buying my music, “owning” it, and being able to play it off my iMac’s disk drive without having to worry about ISP bandwidth.

After disabling the Apple Music subscription service via preference restrictions, Apple Music gets out of the way, and show you a list that is more like the old iTunes navigation tree.

Sure, it is going to take a while getting used to the iOS-ification of the new iTunes component apps: Music, TV, Podcasts, Books, and sync. The improved HomePod streaming support and being able to get rid of the Apple Music section in the Music nav bar is a plus. 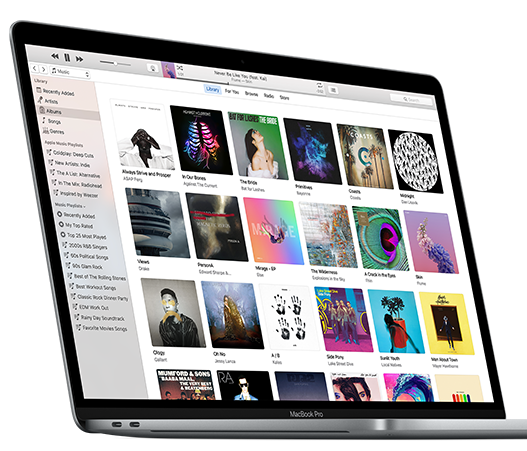 After yesterday’s September Event, which introduced us to the new iPhone 8, iPhone 8 Plus, and the amazing iPhone X (aka “10”), Apple released iTunes 12.7 for Mac and Windows PCs. 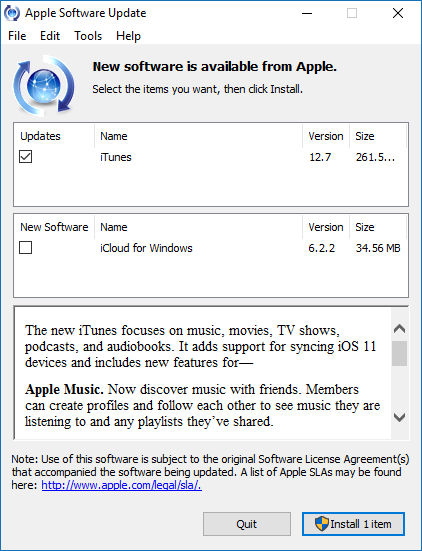 In the release notes for this update, Apple reaffirms iTunes focus on “music, movies, TV shows, podcasts, and audiobooks.”  That’s great news for me, because I use iTunes on my 5K iMac every day to listen to music while I’m working and to watch TV shows and movies that I have purchased from the iTunes Store.

However, Apple is dropping support for some iOS device content management features.

“If you previously used iTunes to sync apps, books, or ringtones to your iOS device, use the new App Store, iBooks, or Sounds Settings on iOS to redownload them without your computer.”

This change should not be unexpected.  iOS devices, including the iPod touch, the only surviving iPod at this point, has had the same “I can get it from the Store myself” that iPhones and iPads enjoy.  Yesterday’s slimming down of iTunes is a welcomed change that gets rid of some of the cruft that has built up in iTunes over the last few years.

Apple is getting ready to launch their newly redesigned Danbury Fair Mall location with the new design language that has already debuted in other retail locations, such as the Union Square store in San Francisco.

As I arrived this morning, the prep teams were still putting the finishing touches on the store: setting up chairs at the newly designed tables, arranging the milk crate seats in front of the video wall in The Forum, and obsessively, and I do mean obsessively, wiping away every smudge and fingerprint on the massive sliding glass panels that make up the enterance to the store.

The store looks absolutely great! It is instantly recognizable as an iconic Apple store, and still offers a clean modern look that makes you want to just come in and hang out.  The Forum video wall looks really nice! Coming to the store for the new Apple Today sessions is going to be really great fun.

All of the Apple managers and staff that I have talked to this morning, like me, are really excited for the new store and the format. This store, just like the products that are sold here, is just incredible!

With less than an hour to go before the Danbury store relaunched, the employees are marking the last checks on everything.

As the 10:00am launch our draws near, the crew gets in a group photo.

After the doors opened, the group of enthusiastic customers that had gathered in the mall flooded in!

If you are currently enrolled in the public beta seed, you will see the new update appear in your Updates tab.

One word of warning: Photos, just like OS X 10.10.3, is pre-release beta software.  That means that there are going to be bugs and you should not install either of these updates on your main, production, Mac that you use daily.  To be a beta tester, you must be prepared to delete everything, applications and data (including family photos).

My recommendation is that you make multiple backups before you install OS X 10.10.3 and Photos on your Mac.  Time Machine, BackBlaze or event a Finder data copy to an external USB hard disk drive or flash drive is a good idea.

The complete list of updates to OS X Yosemite 10.10.3 updates are as follows:

Mac OS X Yosemite 10.10.3 public beta seed can be installed on any Mac that is currently running OS X Yosemite.