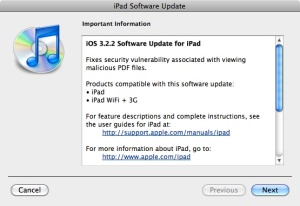 Hackers were able to use the Safari exploit to “jailbreak” iOS devices to run applications that had not been approved by Apple.  However, that same exploit could be used to allow an attacker to gain control of your iDevice remotely.

If you are running a stock iPad, iPhone, or iPod touch, connect your device to your Mac or PC running iTunes and hit the Update button on the Summary tab for your device.

The update weighs in at about 457MB for my Wi-Fi edition iPad.  The package size might be smaller for the iPhone and iPod touch.

If you are on of the folks that doesn’t like to be told how to use your device by Apple, and have gone ahead and jailbroken your device, you will want to wait until there is a new “adjective”sn0w update that allows you to patch your device and exploit a different vulnerability to load unauthorized applications on your iDevice.  Proceed with caution.  Don’t say I didn’t warn you.