Back in June I read a rumor on the gadget blog Electronista.com that stated that Apple was considering launching a free version of their $99 a year MobileMe service.  At the time, I was really excited by the prospect, because, I have a number of Apple devices (three Macs, and three iOS devices) and this would be a great way to keep the address book and calendars in sync across all six devices.

“Apple has lately faced growing criticism for continuing to charge for MobileMe at a time when Google can promise free e-mail, calendars and contacts synchronized online for Android phones where the iPhone is still at least partly reliant on a physical sync without paying $99 per year. The company has recently been working on a North Carolina data center that could help scale such plans in the future.”

And so, I stated to wait patiently.  In the mean time, Google’s Android platform began to grow in popularity until today, Google’s Android is breathing down Apple’s neck.  Does Apple think that they could continue to sell a $99 a year service when Google’s free web apps could deliver a similar service and experience?

Fast forward to this weekend when Mac-centric website MacRumors.com released more evidence that Apple is still considering providing at least some of the MobileMe services for free to iOS users.

In the latest iOS 4.2 and 4.2.1 builds of iOS, MacRumors has discovered error messages in the operating system that read “MOBILEME_CREATE_UNAVAILABLE_IPAD” = “The maximum number of free accounts have been activated on this iPad.” 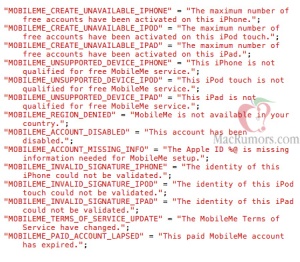 Well, well, well…looks like the iPad maker is still very much considering a free MobileMe offering of some sort.