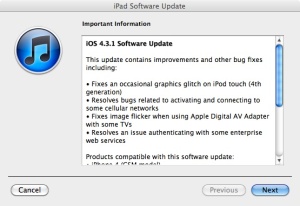 On Friday evening, Apple released a minor update to iOS, 4.3.1.  The update address the following issues:

Notably, the CDMA iPhone 4 for Verizon and the iPad 2 did not receive the update.

I have been using iOS 4.3.1 since Friday evening when it was released and I have not noticed any changes for better or worse.  Some people have claimed that the battery life on their iPhone 4 was decreased after applying the iOS 4.3 update on March 9.

The update is also rumored to address a security flaw uncovered during the security and hacking event Pwn2Own, which too place earlier this month.

The software update is available now for most current model iPhone, iPad, and iPod touch models.

To upgrade your iDevice, make sure that you are running the latest version of iTunes on your Mac or Windows PC, and then connect your iPhone, iPad, or iPod touch, and follow the on screen directions.