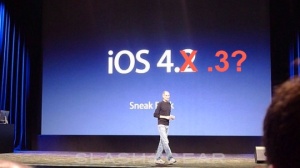 It seems like just yesterday Apple rolled out iOS 4.2.1 to bring a number of new features to the iPad and refinements to the iPhone 4, both models of iPhone 3, and recent model iPod touch handsets.  Oh!  Wait!  It was just yesterday!
But today is a new day, and with it came new rumors that Apple is already at work on iOS 4.3 which is rumored to have enhancements for AirPlay will feature a new set of application program interfaces, or APIs, that will support a new type of for pay subscription system for digital periodicals, like New Corp’s “The Daily” digital only “newspaper.”
It is also rumored that Apple will make some noise with this update and will hold a media event.  This is where things can get a little bit sketchy.  According to an article that appeared on MacStories.net today, a source indicated that Apple had planned to have iOS 4.2 out within the first two weeks of November, with a public announcement and release of iOS 4.3 about a month later in the first half of December.  It is not clear what impact the discovery of a Wi-Fi bug in iOS 4.2 will have on the iPad maker’s plans for iOS 4.3 within the first fifteen dates of December.
What will happen between now and when we close the book on 2010 is anyone’s guess right now.  Be on the look out for an Apple media event on or about December 9 and for iOS to start hitting iPhones, iPads, and iPod touches on or about December 13.
Personally, I’m looking forward to a digital daily news paper, and will try out News Corp’s “The Daily” for about $4.25/month.  I’m also still looking for digital subscriptions to the paper magazines that I already subscribe to.
[Via MacStories.net…]
Follow @alanmgrassia
Subscribe via RSS