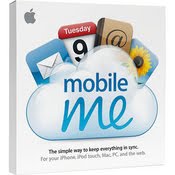 File this under “Crazy Ass Rumor of the Week”, but if Electronista.com and MacDailyNews.com are right, Apple might be feeling some pressure from Google’s free cloud services.

“A tentative new rumor asserts that Apple may turn MobileMe into a free service. The plan would drop the $99 annual fee and let anyone with an iPad, iPod, iPhone or Mac get the online sync service for free.”

“Free MobileMe access would likely be a shot across the bow of Google, for whom online sync has been an inherent feature in most of its software. Android users can sync accounts and contacts for free through Google’s existing services. Apple handheld owners can already sync Google features to some extent but don’t have the live updating of more unless they use Exchange or MobileMe.”

Personally, the only reason why I don’t have a MobileMe.com account is that I really don’t feel like paying Apple another $69-99 a year for an email account – all be it a really handy email account. If the service was made available to me for free since I own two iPods, an iPad, a MacBook, and my recently purchased 17-inch MacBook Pro, hell ya, I’d jump on MobileMe in a second. Google who?

Until we get some more details, however, I’m going to stick with my Google Gmail and Calendar accounts.