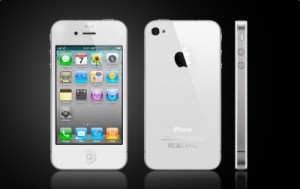 Apple has announced, sort of, via a company spokesperson, that the elusive white iPhone 4 won’t appear until the spring of 2011.

John Paczkowski, of the Digital Daily blog, contacted the iPhone maker and received the following word:

“We’re sorry to disappoint customers waiting for the white iPhone yet again, but we’ve decided to delay its release until this spring.”

I suspect that the changes of us seeing a white iPhone 4 on AT&T or Verizon are right up there with seeing a white unicorn nibbling on your front lawn when you wake up tomorrow morning.  Rather, I suspect, as some other have commented, there may not be a white iPhone 4 at all, and that Apple may have quietly decided to wait until the iPhone 5 is announced to begin shipping a new white iPhone.
In the mean time, comedy sketch group JLE has posted the following YouTube video.  Recoded in a style that emulates one of Apple’s promotional videos, this skit had me laughing out loud, clapping my hands, and stomping my feet.