Apple has unleashed new Apple Watches, iPads, an all new Apple TV and, yes, even the new iPhones 6s and iPhone 6s Plus on the world.

If you haven't had time to sit through the two and a half hour presentation, here's everything you need to know about Apple's newest gear.

Tim started off by saying that we have "monster updates across multiple product lines" and he wasn't kidding.  As with the last keynote, the usual "How are we doing?" state-of-the-state slides were cut. 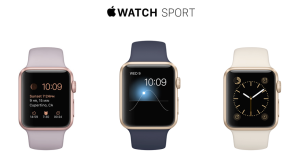 After stating that Apple Watch customer satisfaction was at 97%, Tim turned over the Apple Watch section to Jeff Williams, Apple's SVP Operations.  I don't recall seeing Jeff up on stage so I'm glad they are giving him time in the spotlight.

I like the new watch bands, but was not blown away with the new colors.  I'll likely buy one ore two more fluoroelastomer bands before I upgrade my Sport edition watch in the future.

The AirStrip third-party demo seems like an amazing convergence of medical and digital technology. Apple is really showcasing their work with partners in the health and fitness fields.

Turns out the rumors about a larger iPad were true and that device is called the iPad Pro.  The iPad Pro is clearly targeted at business professionals and not the typical iPad owner.  According to Tim Cook, "iPad is the clearest expression of our vision of personal computing."  "We're partnering with the world's leading enterprise companies, IBM and Cisco, to redefine and transform the way people work in the enterprise."

To introduce the new iPad Pro, Apple played a video with the solar system and the sun. Let's just
get to it already.  I don't want to see a simulated product showing a simulated solar system.  My first impression of the iPad Pro (during the video): "It's nice.  I don't need it."

Then then video ended and Tim Cook came out holding the deice and things turned around quickly for me.  My second impression of the iPad Pro (while Cook was holding it): "I bet it's close in size to a standard format US magazine - I read a lot of content on my iPad Air today.  EW, Time and others, please for the love of God...please...please use retina assets."

So, how do you get a thinner MacBook or MacBook Air? Ditch the entire bottom half of the notebook.  That's the iPad Pro.  I think "Road Warriors" (is that still a 'thing'?) should really
like this for it's extreme portability.  There was no discussion about an Apple Smart Cover or Smart Case.  I would think that with a full size soft keyboard, you could get by without buying a keyboard accessory to save money.

Can the iPad Pro be a compelling alternative to MacBook, MacBook Air?  Assuming you purchase the mid-tier iPad Pro, a Smart Keyboard and a Pencil, your out the door cost is $1,200 for the 128GB Wi-Fi iPad Pro.

Apple Pencil is the stylus that God did't give you and is a much more refined writing experience over today's stylus.  I'm guessing that the people at 53, who make that cool Paper app, are really pissed about the new stylus and it's name.

Improving the experience of note taking on the iPad looks to be greatly enhanced with the new iPad Pro only Pencil stylus.  Overall, it looks like a better experience of using my iPad Air and Bluetooth Jot stylus.

Playing word association with the term "Professional Productivity" does not conjure up images of "Microsoft".  Adobe is the first word that comes to mind.

Admit it, Microsoft Office on iPad Pro with Pencil and Split Screen is incredibly cool!

Adobe's up next with their Com page layout software and Photoshop Fix apps.  Photoshop Fix offers real-time dynamic photo re-touching on an iPad.  This took forever on my 1992 Macintosh IIci desktop.  Now I can do that work from a tablet in real-time.

I was glad to see Irene Walsh from 3D4Medical on stage to show off her company's anatomy app.  That demo looked pretty impressive.

The iPad mini 4 only received a passing mention during the event.  Aside from putting the iPad Air 2 guts into the iPad mini 3 case, there't not much new there.

I wonder what this means for iPad Air 9.7-inch line.  Seems like many people are opting for the iPad mini.  iPad Pro is clearly aimed at professionals. Is this a way to boost margins on iPad line? Is Apple just keeping the iPad Air around because people still buy it?  This feels a lot like the MacBook (One) being out, yet Apple still continues to sell the MacBook Air.

Apple TV, Forth Generation, and tvOS 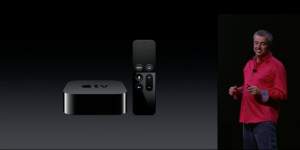 The software that drives Apple TV has been updated too.  tvOS, a variation on iOS - just like watchOS is also a variant of iOS - has gotten a new flat, clean ascetic.  With the integration of Siri, you are now able to use the new Siri remote for Apple TV to speak commands such has "So me movies with Robert Downey, jr", "What was the score from last night's Yankees game", or "What is the weather forecast for later today?".  That's a pretty cool feature...if it works reliably.

With the Siri Remote, better remote control navigation, Bluetooth communication, apps, a redesigned UI and Universal Search the new Apple TV is a worth while upgrade for existing Apple TV owners and people looking to add "smart" features to their TV.  My initial reaction to Apple TV was that Apple has caught up to where everyone else is.  But the story does quite end there. If you squint when you look at Apple TV, you can see where Apple plans to go in the future, so I'm holding out hope that Apple TV and tvOS will have a more compelling reason to buy one over it's competitors in the future.

To introduce the new Apple TV, Tim brought out Jen Folse from the Apple TV engineering team to demonstrate some of the new features.

Apple TV's operating system received an official name this year, and it is "tvOS".

At about 83 minutes, gets to the part of the presentation we have all been waiting for: iPhone 6s and iPhone 6s Plus.

With so much packed into this presentation, you will recall that Apple chose to cut out all of the status updates.  Still, Tim Cook still found the time to take a jab at all of the Apple naysayers by pointing out the iPhone has grown 35% year-over-year.  Boom!

The new iPhone 6s and iPhone 6s Plus will have bodies constructed with Apple's 7000 series aluminum and come in a new rose gold color in addition to silver, gold and space grey.  Being an "s: year, Apple has chosen to keep the same display sizes: 6s 4.7-inches and the 6s at 5.5-inches.  The bodies are slightly larger than the previous year, however, Apple's website still shows that iPhone 6-series and iPhone 6s-series phone will be able to fit into existing cases.

So of the new features about the new iPhone that I really like are:

In addition to the specs, Apple has made some changes to the hardware line up.

The iPhone 6S/Plus go on sale Sept 25.  Pre-orders, the only humane way to order on iPhone, will be available with free shipping to your home or in store reservations.

There's a lot to digest with the Hey, Siri event and I'm looking forward to getting my hands on the new hardware and software as soon as possible.