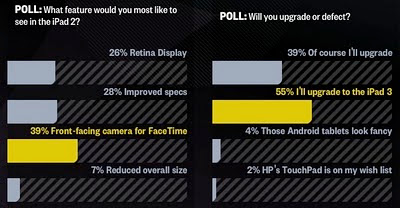 On Feb 24, The Daily, the iPad daily newspaper, asked readers what feature would they change for iPad 2 and whether or not they would upgrade or defect to another tablet platform.  The responses where interesting.

39% of the people who responded by the time I got around to reading the article had stated that the feature they are most interested in is a front facing FaceTime camera.  And with rumors of the iPad 3 possibly shipping in September along side new iPod touch models, 55% of the people who responded, again at the time I had voted, said that they would wait until the third generation Apple tablet to upgrade.