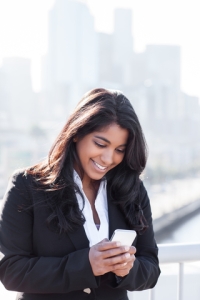 I generally don’t read USAToday, except while traveling, but a pair of articles on texting caught my attention.

The first, “Sore thumbs? Text messaging declines” (link) talks about the decline of SMS messaging by consumers.  People aren’t texting less, they are sending more messages then ever.  According to the article, Americans sent an estimated 2.2 trillion messages in 2012.  What is in decline is how many of those 2.2 trillion messages are sent and delivered by Verizon, AT&T, Sprint, T-Mobile and other wireless carriers.

It place of SMS messaging is the rise in popularity of Internet-based short message service (SMS) applications such as Apple’s iMessage, Snap Chat, BlackBerry Messenger, and all the rest.  Unlike the SMS service you sign up for when you buy a new cell phone, these new texting apps use your phone’s Internet connection rather than the voice network on your cell phone.

So what does this mean?  Well, for one thing, it means that many of us can probably save some money on our monthly cell phone bills.  The days of thousands of dollar monthly bills due to uncontrolled text messaging is probably coming to an end.  My entire family has either an iPhone, iPad, or iPod touch and we all text each other with iMessages.  The number of pure SMS messages charged against my cell phone’s texting service plan in a month are virtually non-existant.

I once read an article online that spoke about text messaging fees from the big four wireless providers here in the U.S.  I didn’t save a copy of that article, but it essentially said that text messages are sent of the voice portion of the cell phone and that it only costs the phone company a few pennies to send a message.  We, the consumer, are paying anywhere from $0.10 – $0.25 for each message we send and receive.  To illustrate, if I send a text message to a friend on the same wireless service as me, the phone company will make $0.40 – $1.00 on what is really just to messages.  They make money when I send the original message twice (they charge me to send and my friend to receive) and when my friend replies.  Talk about price gouging.

The second article, “Fewer drivers nabbed by texting bans” (link) has to do with texting while driving, a very stupid thing to do, and the efforts of law enforcement to reduce the habit.  That piece, I think will be a different rant altogether.