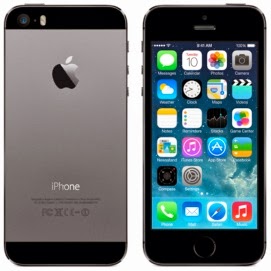 It has been a beautiful fall day here in Connecticut, especially since I was lucky enough to pick up a 32GB Space Grey iPhone 5S this afternoon at the New Haven Apple Store.

According to the staff, all of the Verizon and AT&T iPhone 5S models were sold out.  I also got the impression that the 16GB iPhone 5S units for Sprint and T-Mobile were running close to empty also.  But, as it turns out, they still had “a few” 32GB Sprint units left, to which I happily forked over my $299, plus tax.  I also picked up a Product (RED) Apple leather case of my new iPhone 5S.

The Apple Store was “super busy” this morning, but when I arrived at around 2:00pm today, the store was full of people, but it wasn’t a mob scene.

While I was lucky to have gotten my iPhone, and rather late in the day I might add, not all of Apple’s fans where able to get their hands on the new white and ultra-rare gold iPhone 5S were difficult or damn near impossible to find.

I took a few minutes to look at the new gold color iPhone 5S.  If you are looking to buy a gold iPhone, this photo might be as close as you can get for weeks yet.

Regardless of what you plans were for iPhone 5S day, I hope it was a good one for you.