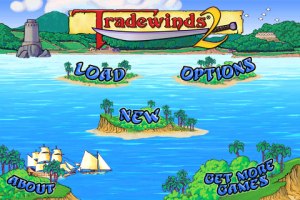 Whether you are new to gaming on your smartphone or have been around for a long time, you owe it to yourself to check out the games that Astraware releases.  These guys make some of  the best mobile games around.

Staffordshire, UK – November 11, 2010 – Astraware® and Sandlot Games® are excited to announce they are bringing the highly-acclaimed adventure trading game, Tradewinds® 2, to Palm® Pre™ and Pre Plus smartphones.

Astraware has recently released its first games for webOS™, and is delighted to work with long-term partner Sandlot Games to add to the range of quality games on the App Catalog by bringing one of its most popular franchises to the platform.
“Astraware continues to be a fantastic partner on a variety of platforms, bringing the best of our franchises to new users worldwide,” said Daniel Bernstein, CEO of Sandlot Games. “We look forward to the success of Tradewinds 2 on the webOS platform.”
Based on the PC game of the same name, Tradewinds 2 is an adventure trading game set in the Caribbean. Players are invited to navigate a fascinating new world and discover uncharted ports teeming with friends and foes alike. They can be a master commander, defeating pirates and plundering their vast hordes of booty, or they can play it safe by trading exotic island goods, gradually amassing untold wealth, power and influence.
“We’re delighted to work with Sandlot to bring Tradewinds 2 to webOS smartphones,” said Howard Tomlinson, CEO of Astraware. “Many long-time Palm users will know and love the Tradewinds games and we’re sure they’ll love the hours of in-depth game play, trading in goods, battling pirates and completing missions”.
Tradewinds 2 is available now for Palm Pre and Pre Plus running webOS 1.4.5 from the App Catalog on device. For more information about the game, visit http://www.astraware.com/webos/tradewinds2.
Follow @alanmgrassia
Subscribe via RSS