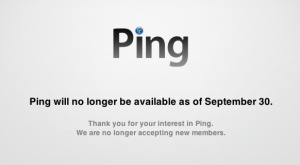 The iTunes Ping service has closed.  More commonly referred simply as Ping, was Apple’s attempt at a social media service integrated with the iTunes Store.  Ping was available in iTunes for Mac and Windows PCs.
Users were greeted with a simple message in iTunes stating that the service has closed.  Ping was a service that allowed iTunes users share and discover new music and old favorites.  It was also intended as a way for artists to connect with their fans and offer updates on what they were doing and when they would be touring.
Ping turned out to be one of Apple’s rare disasters with low adoption and usage rates.  It was also widely held that Apple had originally intended to have iTunes integrate with social media giant Facebook, but a deal could not be reached between Apple and Facebook.  The cost of the licensing agreement for the interface to Facebook was rumored to be the cause of the disagreement.
iTunes Ping was launched on September 1, 2010.
Alan on Mastodon