Yes, this update is safe to install.  Since this is a maintenance release, there are no major new features or interface changes.  The areas that received updates include a new installer that requires less free space on the device to perform upgrades, an Apple ID login fix for Messages and FaceTime, a Spotlight app search fix, fixes for multitasking gestures on the iPad and a new configuration option for test taking in school applications. 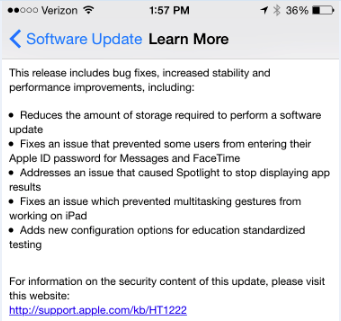 I’m glad to see Apple working to fix these nagging issues.  I’ve seen a lot of iPhones and iPads belonging to family members and co-workers who don’t have the latest version of iOS 8 installed because there is not enough free space to download, unpack, and install the update.  I’m also gald to see the fix for the Spotlight search feature.  I very often use that feature as an app launcher and it was super annoying to have to restart my iPhone 6 to restore app search.

iOS 8.1.3 is available for all current model iPhones, iPads, and iPod touches.