On Friday, Apple release the iPhone 6s and iPhone 6s Plus to the legions of Apple fans around the world.  Here is an account of my experience.

Pre-Ordering my iPhone 6s Plus
The story starts a little over a week ago with a pre-dawn 3:00am scramble to place my pre-order for the iPhone 6s Plus.  Just like last year’s iPhone 6 order and this past April’s Apple Watch pre-order, I chose to use the iOS Apple Store app.  It’s the best way to jump in and get your new hardware ordered on pre-order and launch day. 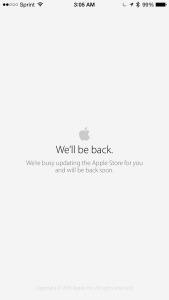 As you can see, it was a few minutes after 3:00am before the Apple CDNs updated and the Apple Store app started serving pages. 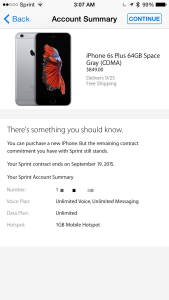 At 3:07am, I was able to begin the pre-order process.  Notice the lack of a link for in-store pre-order reservations.  We’ll get to that in a minute. At 3:08am, I was done.  Not too bad.  What I ended up doing was placing an order for delivery directly to my home.  What I wanted to be a part of the in store launch day hoopla that we’ve come to expect from launch day.  Then tweets started trickling in that other people where able to select a local store for pick up.  At 4:00am, things looked a little different.

Now, the “Check reservation availability” link was showing up.  I wan’t able to change my order to a reservation, so after a nice chat with Apple customer support, they helped me fine an Apple Store in Connecticut that still had the iPhone 6s Plus that I was looking for and then, once my reservation was confirmed, they cancelled my order.
iPhone 6s and iPhone 6s Plus Launch Day
This year, reservations worked a little different than last year for the iPhone 6 and iPhone 6 Plus launch.  Pre-order reservations were doled out with reservation times.  Since I had the fumble with the order vs reservation situation, my reservation was for 8:30am and not 8:00am.  Still not bad.  It didn’t really matter because I took the day off.  There was virtually no chance that work would get done with a new phone to play with.  (Ironically, I did end up getting called to handle an emergency, and why this post is going up on Sunday evening and on Friday afternoon.) 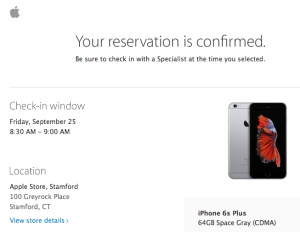 I arrived at the Stamford Apple Store at about 6:30am.  I was a little surprised by the fact that I was the first reservation customer to show up.  There were already about 40 – 50 people standing in the stand-by line.  The lines were broken up into three groups: 8:00am reservations, 8:30am reservations, and stand-by.  Also new this year, the reservation customers would be taken into the store first and then the stand by customers.  I was talking with the store employees and they told me that since I was there so early, they would let me in with the 8:00am group.
As with previous Apple product launches, the Apple Store team reviewed how the morning would go, had a quick team meeting and even got in a few team building activities.

At 7:57am, the team lines up and gets ready to open the store at 8:00am.  From down the hall you can hear clapping and cheering as Apple Store employees get the stand by crowd all worked up and head into the store.

I was hoping for a 10…9…8… style count down, but why should the customers be the only ones having all the fun.

At 8:01am, I was taking inside the store to purchase my new iPhone 6s Plus.

All told, I was in the store for about 10 minutes.  Since I was buying my new iPhone outright, there were no contracts to sign, purchase plans to pick out or having to wait for phone activations.  Before leaving, I took a minute to thank everyone who helped me for coming in early just so I could buy a new phone on launch day.

Now it was time to head home, take some unboxing photos and setup my new iPhone 6s Plus.

Thanks Apple!  I know I’m going to love my new iPhone 6s Plus!