Now that I have made my Apple iPad reservation with an Apple Store here in Connecticut, I’m taking a look at what accessories I might want to get for my new mobile gear.

I’ve been walking around with a simple screen protector on my iPod touch and it has done the job nicely since the iPod is carried around in my laptop bag or my pocket. While that might be OK for an iPod or iPhone, the pocket trick won’t work for an iPad.
Alan’s Must Have iPad Accessories
1. Apple iPad Case

If I’m going to have my iPad with me at the office, I’m going to need something more than a screen protector. I’ll have to get some kind of case of it. And it looks like Apple’ iPad Case is a perfect fit for my tastes. It no only protects the iPad, but it also serves as a stand for the iPad so that you and position it for watching video, reading, or viewing photos. It also folds to become an angled wedge that positions the iPad so you can type on the on screen keyboard. (I’m able to touch type on a hardware keyboard, but I’m not sure how well I’ll be able to “touch type” on the iPad. We’ll have to see how things go.)
The iPad Case will go on sale sometime in April, but I don’t expect it to be ready for the April 3rd launch. The iPad Case is priced at $39.00.
2. Apple iPad Dock 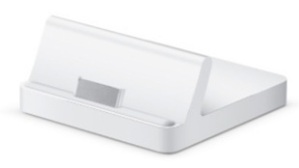 The iPad Dock works just like you would expect the iPhone or iPod dock to work. It provides you with a base to plug your iPad into and then has a dock connector port you plug in the iPad’s dock connector to USB cable and plug the other side into your Mac or PC. There is also an audio line out that you can connect to external powered speakers. The Apple iPad Dock also works with all of the other iPad dock connector accessories like the video out cable.
The Apple iPad Dock will be available for $29.00 on April 3rd.
3. iPad Screen Protector
Call me crazy, but after shelling out $500+ on a new gadget, I still want the screen to look amazing and be scratch free two years after I buy it. It’s true, I baby my hardware. While I don’t see any Apple or third-party screen protectors in on the online Apple Store today, I do expect them to show up before long. And, so, I’m adding a screen protector to my list of must have accessories.
You can see Apple’s other iPad accessories at the online Apple Store.
Regarding Palm
NTY: A Battle for the Future Is Getting Personal
Alan on Mastodon