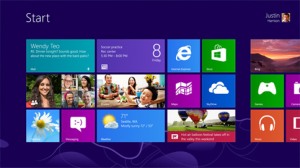 Windows RT is intended for the low-end Microsoft Surface tablet, which is on sale now.  Windows 8, and Windows 8 Pro is intended for desktops, laptops, and the Microsoft Surface Pro that will go on sale early in 2013.  Windows 8 Enterprise is intended for large corporations and is not available to the general public.
Windows RT is an interesting addition to this mix.  Unlike all of the other versions of Windows, Window RT can’t run regular Windows applications that you can run on your every day PC.  Devices that run Windows RT, like the Surface, can only run applications that are designed specifically for Windows RT.  (Think about it like the difference between Apple’s Mac OS X and iOS operating systems.)
If you wish to learn more about the different versions of Windows, check out Dummies.com.
Follow @alanmgrassia
Subscribe via RSS